Stuff like this chart below from is my mates blog 1907shots and I explain them here a bit. 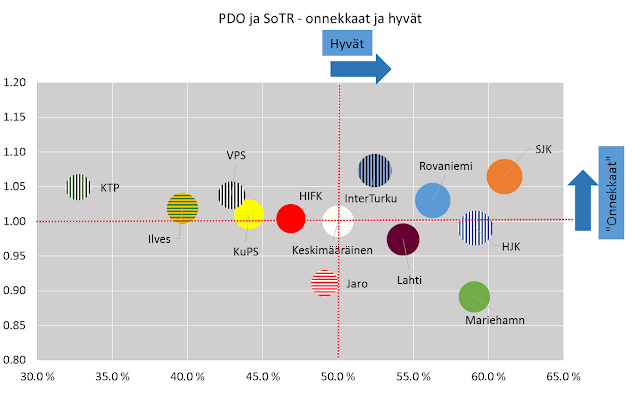 In short what the chart tells you is that SJK, RoPS and HJK were both the "best" and the "luckiest" this season followed by Lahti and Inter by a large margin. The unluckiest of all was MIFK, and the worst were KTP and Ilves. The final standings accept this theory rather well, and the biggest loser in terms of luck was Jaro. However not scoring is not only unlucky, it is also a feature and lack of class.

Top-3 were the only clubs that you could think of winning the title, as as they were really close in terms of points there is a lot of room for speculation.

SJK were ranked as 2nd at odds around 10 before the season. Big budget, large quality squad but the only foreseeable scenario for the title was that HJK should fail big time -as they did. SJK were strong in the defense but boring and cautious in the attack, and performance-wise they were a disappointment.

HJK failed miserably in their pre-season training which led to massive injury crisis during the season and at "best" they had about a dozen players sidelined. The new signings also failed except Tanaka, and their European campaign was a mess despite being very close to qualify at least to Europa League for a few moments. To get kicked out at extra time after gk mistakes was just the icing of the cake. Still they should had won the title,but losing to SJK a few rounds before the last round in an even match was the deciding moment. HJK's "top" signing of the season Mike Havenaar appeared as the worst signing ever as he was not interested and was all the time in a wrong role in a wrong team. Not all his fault I guess and he is doing ok back in his native Holland. He was best used as a mascot and a compagnion to the real top man Atomu Tanaka.

RoPS started the league with 3 consecutive losses as the manager experiment with new defensing formation which was no success, and they kind of lost the title already in April despite being the most solid of the league for big parts of the season. In my papers they were the moral winners and also enjoyed the services of leagues best player Mostagh Yaghoubi. Below is the start of the season for RoPS with also the league cup final loss and cup loss of 7-3 to Inter!

At the bottom fight one could argue that if Jaro 's top player and scorer Emet would had been fit they would survived easily, but he was not. KTP deserved to go down, and they were thrashed in the play-offs in the hands of PK-35.

PDO – Uhhhh…
I’m just going to copy the definition from James Grayson.
“PDO is the sum of a teams shooting percentage (goals/shots on target) and its save percentage (saves/shots on target against). It treats each shot as having an equal chance of being scored – regardless of location, the shooter, or the identity or position of the ‘keeper and any defenders. Despite this obvious shortcoming it regresses heavily towards the mean – meaning that it has a large luck component. In fact, over the course of a Premiership season, the distance a teams PDO is from 1000 is ~60% luck.”
SoTR – Shots on Target Ratio
Lähettänyt JS klo 4.14 Ei kommentteja: